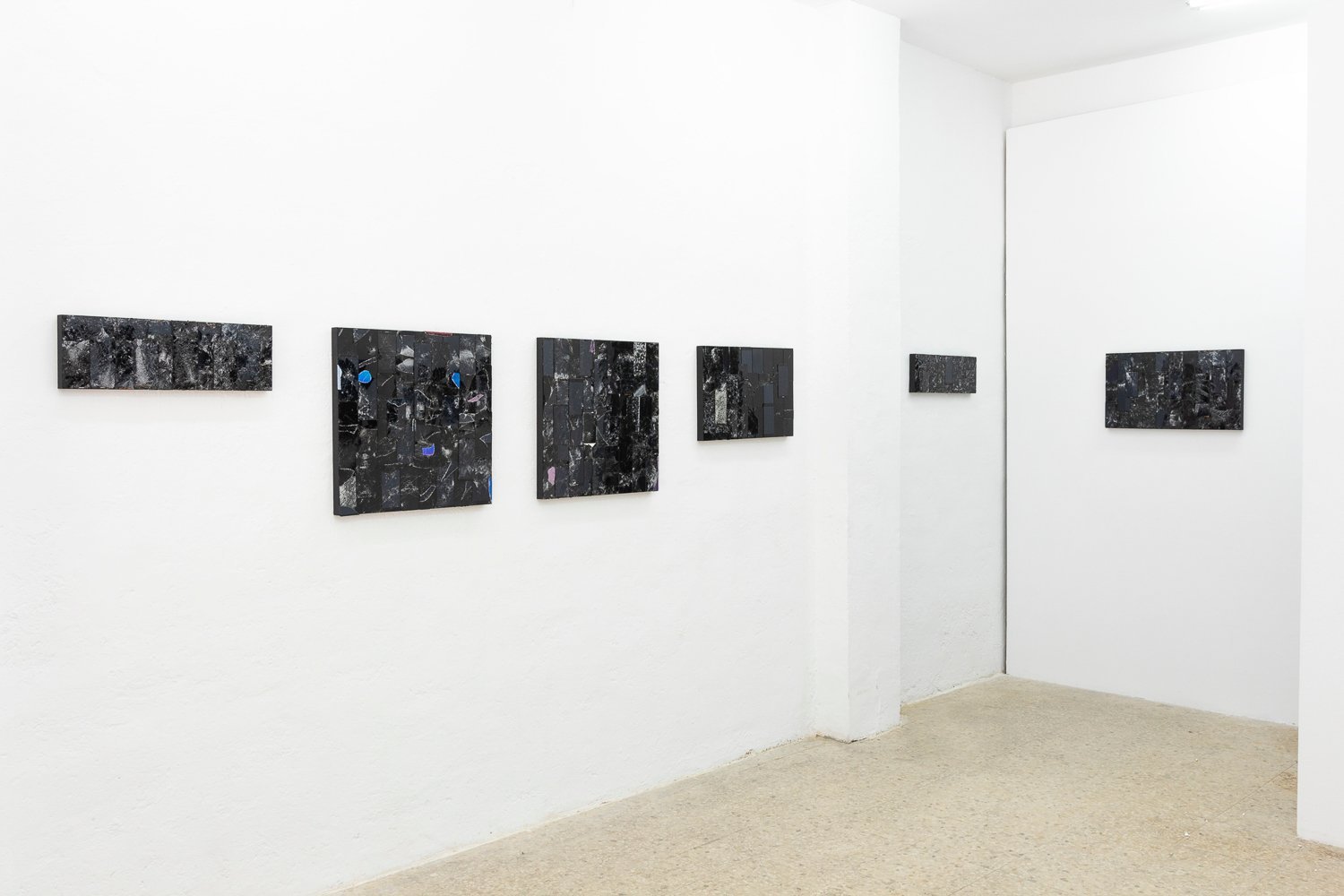 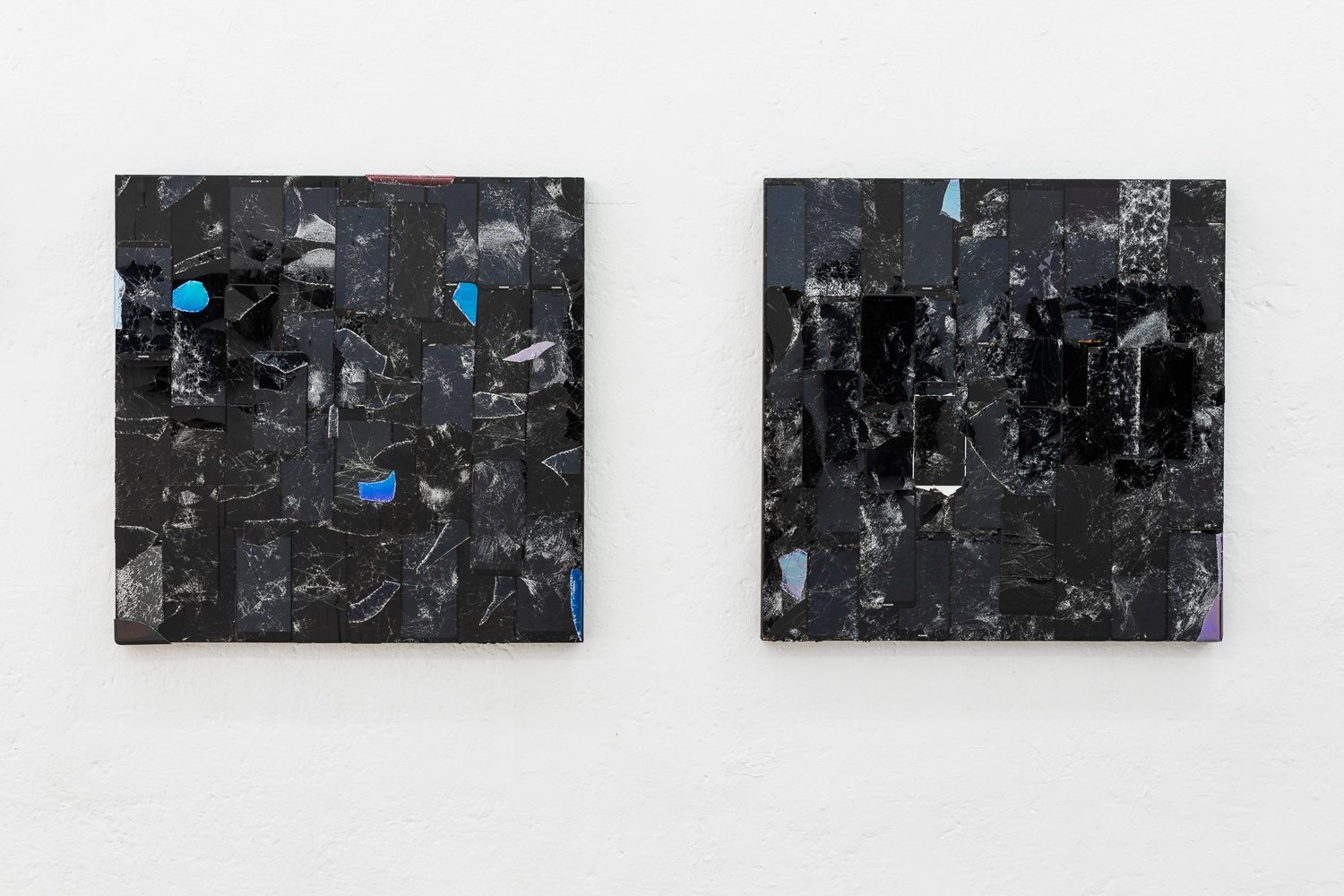 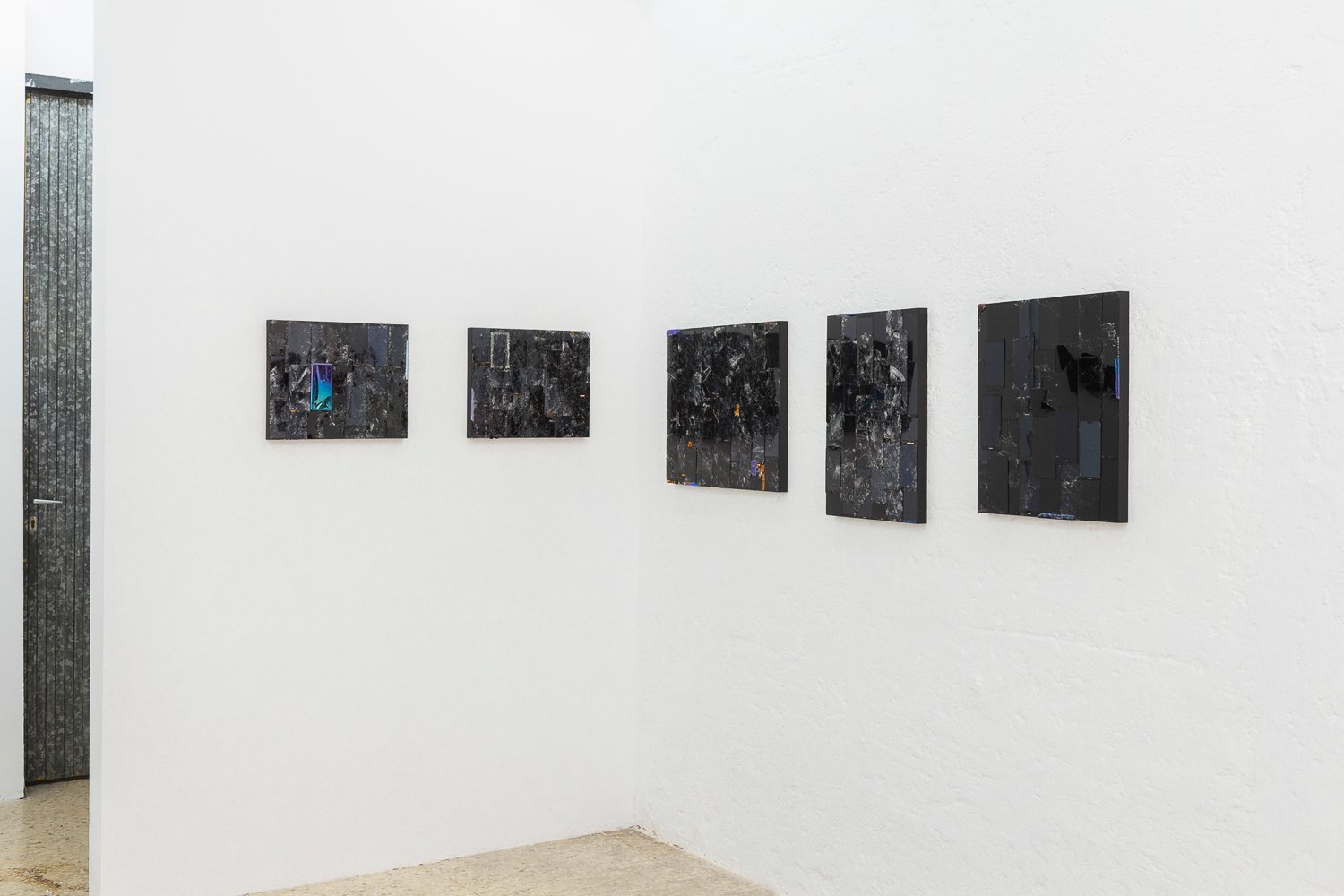 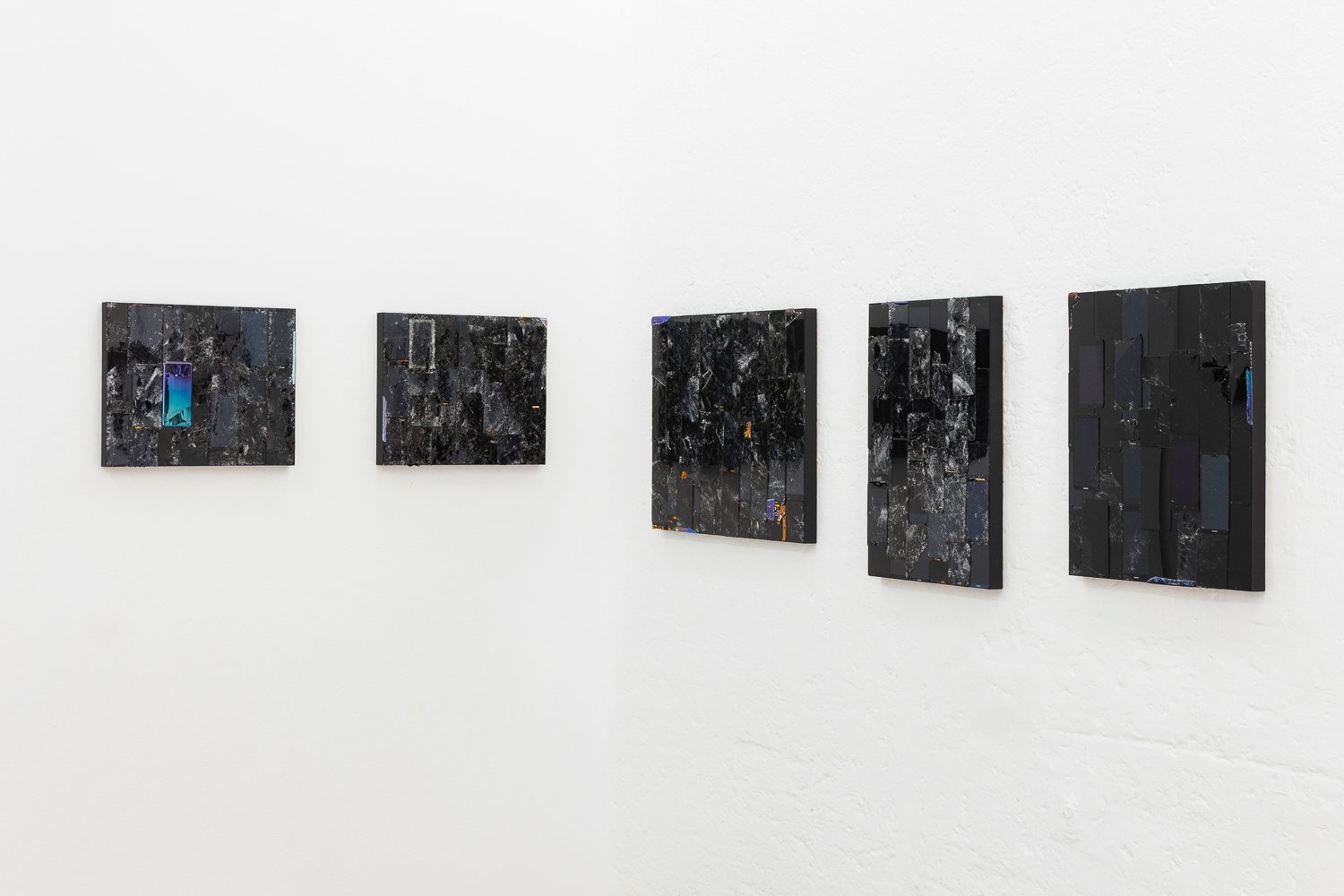 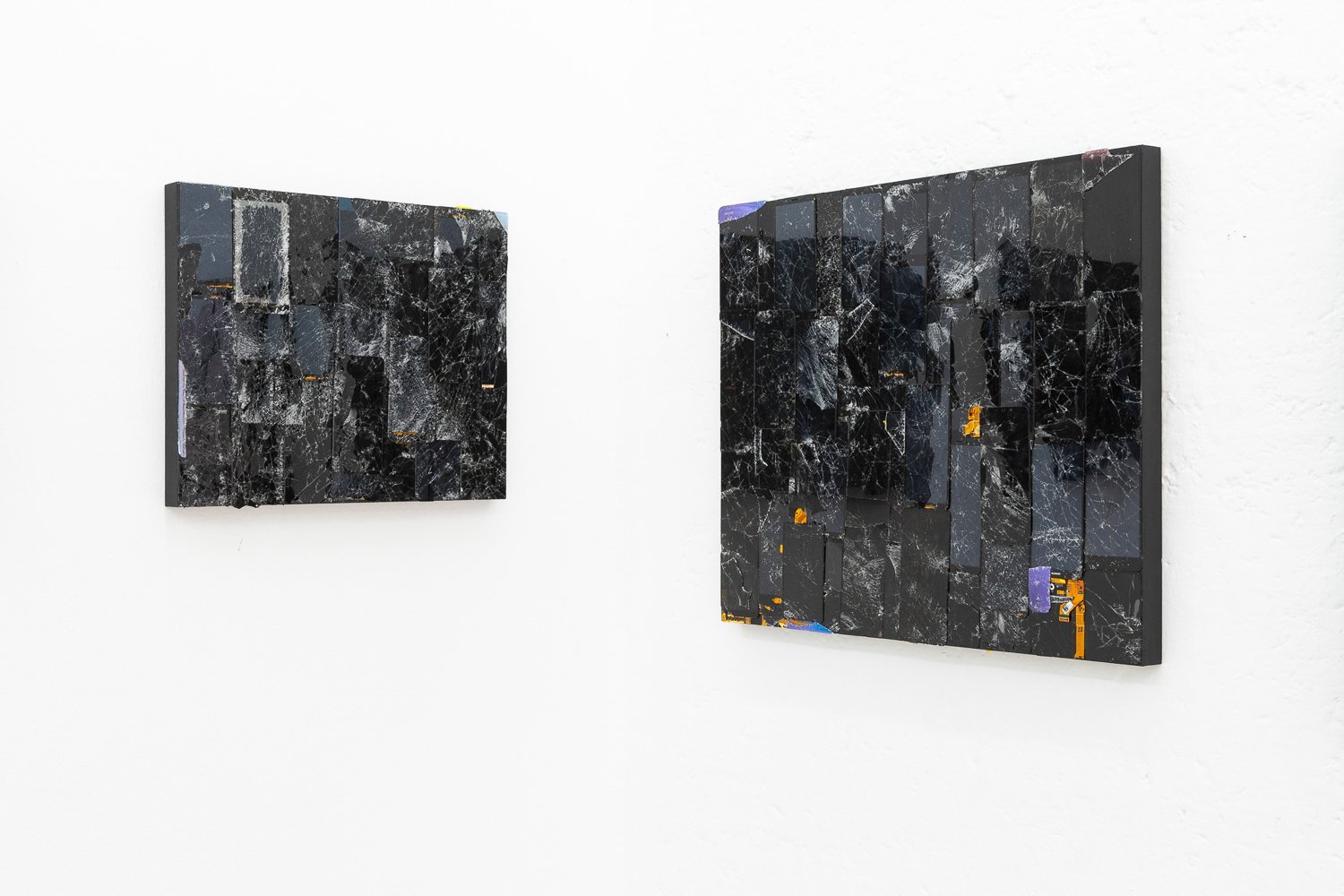 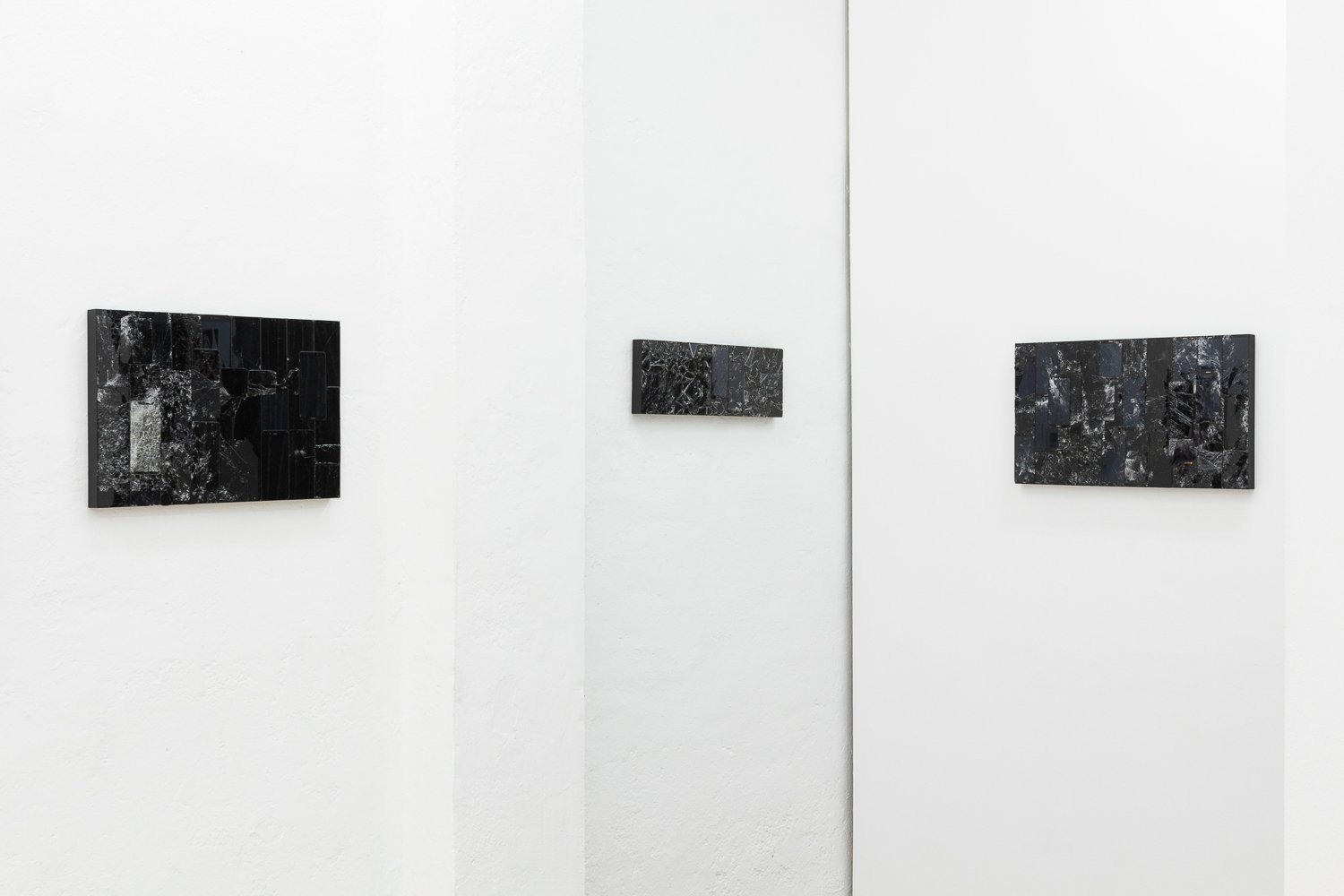 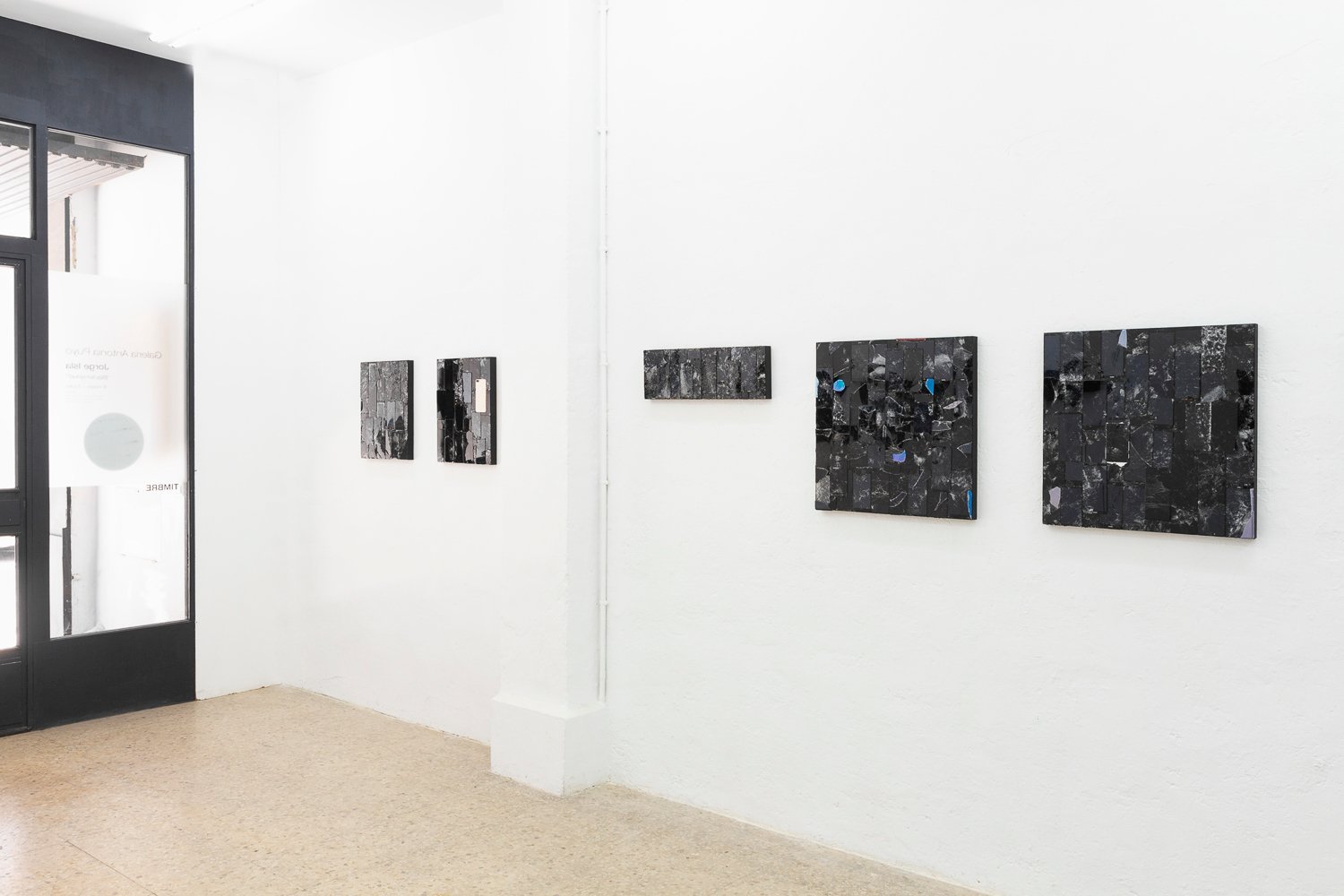 THIS IS A SHOT.

In November 2020, Rejected Designs for the European Flag, a book that gathered, for the first time, the more than 150 discarded designs submitted for the European flag, was published. I was particularly struck by Salvador de Madariaga’s design: a cobalt blue background with each of the countries that would be part of the European Union represented by a yellow circle that matches spatially the geographical location of each capital. Some people criticised it because «they look like bullet holes in the flag».

This implication of Madariaga’s design came back to me when I faced the work of Jorge Isla (Huesca, 1992), especially his Le Reflet series, the group of works that are part of the Blackmarket exhibition, his second solo show at the Antonia Puyó Gallery. Broken cell phone screens brought back to life, patchwork style, on a canvas aimed to be hanged in the wall. Whatever happened to each of these devices? I fantasize that it was a shot on their pristine surface (I won’t say “immaculate”, for it would be too much of a reference to the colour white); a “photographic” shot like the one produced and visualized through this same screen. This is a shot–as Hito Steyerl would say. The device that somatises the shot –the photographic one, but also, and above all, warlike.

I follow on with the European flag, which I understand, in relation to Isla, as a synecdoche of the West. Because the artist’s canvases are, in a way, flags. Formed by bodies —because that is what they are— replicated and stored, as in that scene from Westworld. Blazons that continue the path from the European dark blue almost black to the new shiny, immobile and silent dark. The flag of a world as a corporation. Fade to black.

In this world as a corporation, Isla is able to work the chimera, to paralyze the cycle of programmed obsolescence, taking fragments of the device that, instead of melting back into new terminals –I’ll be back–, become canvases, thus suspending the agonizing advance ad nauseam of the apparatus. The system would remove —for our own safety, of course (what a talking point this would be now in 2020-21), these defective and broken pieces. Isla, instead, collects them, almost with affection, and puts them together. A fragment, like a small work of art, must be entirely isolated from the surrounding world and be complete in itself like a hedgehog. For the system, the hedgehog is prickly: they have to protect us from it. For the artist, the animal is perfect and must be protected and fed.

Then, he collects and polishes the pieces that are the work itself, through something formally and methodologically reminiscent of the trencadís technique, that strategy of Antoni Gaudí that consisted on recovering fragments of bright and colourful tiles to cover the curved finishes so characteristic of his work. The difference is in the shot –this is a shot: while the Catalan artist understood the ceramic fragments as living cells, part of the same organism, Isla’s corpus is a continuous surface but a broken one that highlights and exaggerates the discontinuous and broken form: pure necrosis. And this is, perhaps, what shall bring us back to life. Fade to black.

The last questions that pops up before I end up fused with my device –I’ll be back– is whether we should go back to the screwdriver to control the apparatus. Maybe yes, just not to open the phone and install a new screen.